“I respect any band who references their own name in one of their songs.”

(Get a FREE ringtone of Instant Therapy by right clicking the above sample.)

YOU HAD BEAUTIFUL GREEN EYES AND THEY’VE GONE HAZEL

Rock and roll can swing, chug and motor. It’s the beat. The guitar. The voice. 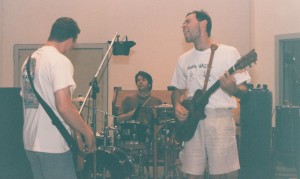 Inspired by a music tradition that spans six decades, Gone Hazel absorbs the many styles of rock and roll, builds on it’s foundation and then takes off. Guitars and cymbals crash in unison, vocals leap into the upper register. The songs are grounded in heart, soul and sweat. You can hear it all in one track:

Originally titled Gone Hazel, Instant Therapy was written in 1988 by Torontonian Roberto LiVolsi. The song sat around for a few years until the band Jellyside Up recorded a demo in 1993. The demo lived on a cassette for a few more years.

In 1996, Gone Hazel was presented to a new band as a potential song, with songwriter LiVolsi stating he hated the title. A voice came from behind the walls (or was it beneath the floorboards?) and said:

“Why don’t you use that title as the band name?”

There was a moment of silence followed by euphoric agreement. The proclamation was made:

“From this day forward let this new rock and roll music be called Gone Hazel!”

With the band name decided, attention turned to renaming the song. Time passed and no guiding voice came from behind the walls or beneath the floorboards. The new title, Instant Therapy, would only come the old-fashioned way – it fell from the sky!

Most of Instant Therapy was recorded in Chicago in July, 1997 which was a very good year. The original version was released on The Kids Are Bored CD.