Little Steven’s Underground Garage radio is on channel 21, SiriusXM radio & plays great rock and roll music that has slipped through the cracks over the years. Gone Hazel is thrilled to be featured on Goldie’s Garage. Thanks Genya!

Another video was made for This Old Boat, filmed sometime in 2004. To avoid the work and disaster that became Learning to Crack Part 2, this was a much easier video to make because multiple scenes & multiple takes were shot. With a simple back-drop, Gone Hazel would lip-sync the song (as is the tradition) and then in the editing room, we’d have some fun putting it together. It went really well. The director was so excited that when we took a break he wanted to show us the first few takes. Indeed, it looked great. We finished shooting that afternoon, went off for dinner to the Hard Rock Cafe (it’s a lifestyle, you know) and talked about how much fun it was.

And then the call came.

The director said that the first half of the footage was ruined because – now get this – after showing us the early takes, he forgot to forward the tape. He actually erased all the work we did when we did further filming. Apparently he tried to salvage what he had, which was us singing the ending, maybe, who knows. We’ve never seen disaster number two which was the video for This Old Boat. And there are no still photos of the shoot, as far as we know.

Uh Was a Hound

There is a footnote to the early Gone Hazel videography, which up until today, doesn’t exist. After the heartbreak of the Learning to Crack Part 2 video, the filmmakers, two lovely guys from Sweden, wanted to do another video for a different song, Uh Was a Hound. We said, being as upset as we were, just make the thing, make us look good, and let’s be done. The end product was us in black suits and ties miming to our song except – you hardly saw us. Most of the video was of our equipment. A guitar, a bass, a bass drum, the knobs on the guitar amp. So much for making us look good. The video is out there somewhere in someone’s archive. We saw it once and hated it. There is also a photo of us from the shoot which, by the way, didn’t make us look too good either. So much for the sharp black suits.

Which brings us up to the present day and the video for Alternative This, which has not only been completed, you can see it here. 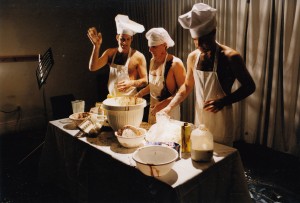